Every month find a different anecdote, historical description, unusual fact from Philippe Cantarel, the Tourist Office guide and speaker. Thanks to him, you will see the two thousand years of Frejus’ history differently.

THE FRÉJUS COAT OF ARMS

In the 13th and 14th century cities in Provence joined the fashion for having a coat of arms. Fréjus chose to take an emblem marking an important event in its history. The crest decorated with a Latin cross probably commemorates its participation in the Crusades. As in 1096 thousands of crusaders left daily from Fréjus, which along with Marseille, Toulon, Antibes was one of the ports, it is likely that Fréjus decided to adopt the simple cross that adorns its escutcheon. First crusade announced by Urban V, in 1095 in Clermont, a city which also sports the Latin cross on its shield.

As Fréjus, whose bishop Berenger III participated in the Council of Clermont in 1095, was certainly the point of departure for several crusades, it is reasonable to assume that the city thus earned the cross on its coat of arms.

The cross is not the only honourable symbol adorning the Fréjus coat of arms. The chief (upper third) has three fleur de lys which are the reminder of the royal arms of France. Fréjus was among the kingdom’s ‘good cities’, which had the privilege of being represented in Reims for the coronation ceremony.

Although coming under the viguerie of Draguignan, Fréjus had the right to appoint people to the Provincial assembly.

The General Armorial of France is a heraldic census ordered by King Louis XIV in 1696, in order to establish a general record of all the coats of arms in use by individuals and towns throughout the kingdom and ensure exclusive ownership. This royal edict had no other purpose than as a fiscal measure since payment was made for registration.

The coat of arms of Fréjus is therefore recorded in the General Armorial of France:

“Silver cross gules, chief with the arms of France topped with crenelated towers”

Gules is a red heraldic colour. Blood red, red symbolizes life. It also symbolizes the soul, heart and passion. It is the colour of regeneration, resurrection.

A silver cross. In heraldry, silver represents the colour white. The cross unites horizontality with verticality. It is the junction of the human plane, the earthly world and matter, with the heavenly world and the mind. In heraldry its symbolism is linked to the four cardinal points.

This cross indicates that the city was one of the ports of embarkation for the first crusade. This crusade took place from 1096 to 1099, following the refusal of the Turks in 1078 to give Christians free passage to Jerusalem. This crusade ended with Jerusalem being captured in 1099.

Chief in the arms of France. The chief is the upper part of the shield, separated from the field by a horizontal line. Blue with golden fleurs-de-lis.

Crenelated towers on the crown topping the coat of arms means the city was a fortified royal domain and not an open city. The rampart dates from 1569, by Charles IX, so the coat of arms is certainly later than this. 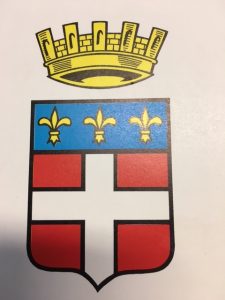 Have a good time and take part to our events, discover our suggestions